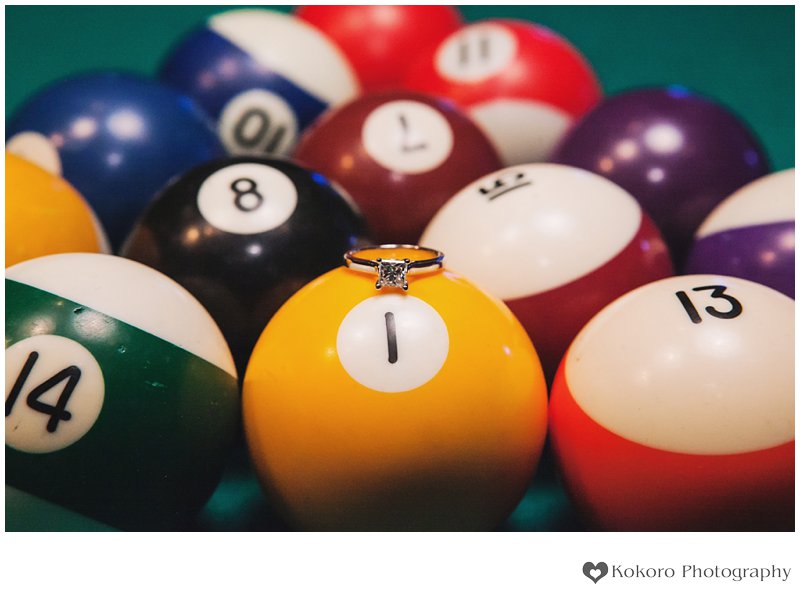 Ahhhh! I love surprise proposals! Especially when I know and love the couple. Kelly, Adam and I go to the same crazy wonderful bar church, and I’ve really enjoyed getting to know them over the past year or so. Adam came over to help me with a project for Wonderbound, and over a beer and some and planning notes he told me that he was planning on proposing to Kelly. He had some ideas in mind, but nerves and timing changed everything- I think for the better.

Enlisting the help of Diane, another church member who also digs secrets, Adam put together a “surprise” party for her birthday at My Other Bar, where he and Kelly had had their first date. He even managed to get some of their friends, relatives and coworkers there, even though they don’t attend AfterHours, without spoiling the surprise. Kelly just thought they all wanted to hang out on the same night, so whatever, we’ll be at this bar playing pool. We’ve done a number of very private surprise proposals where we are the only witnesses, but I have to tell you, there’s something about having all these people who are close to you there that’s really special.

Only 5 or 6 folks knew that they were really there for a proposal, and that surprise birthday hadn’t really been a surprise party at all. As Kelly and Adam finished their game of pool you could see the news spread from table to table until everyone was watching. Poor Kelly kept saying, “Why is everyone watching me lose?!?” After the game, Adam got down on one knee, and Kelly said “yes” to furious applause and a giant group hug.

Congratulations again you guys. You’re wonderful together, and I’m honored to have been a part of your special moment!