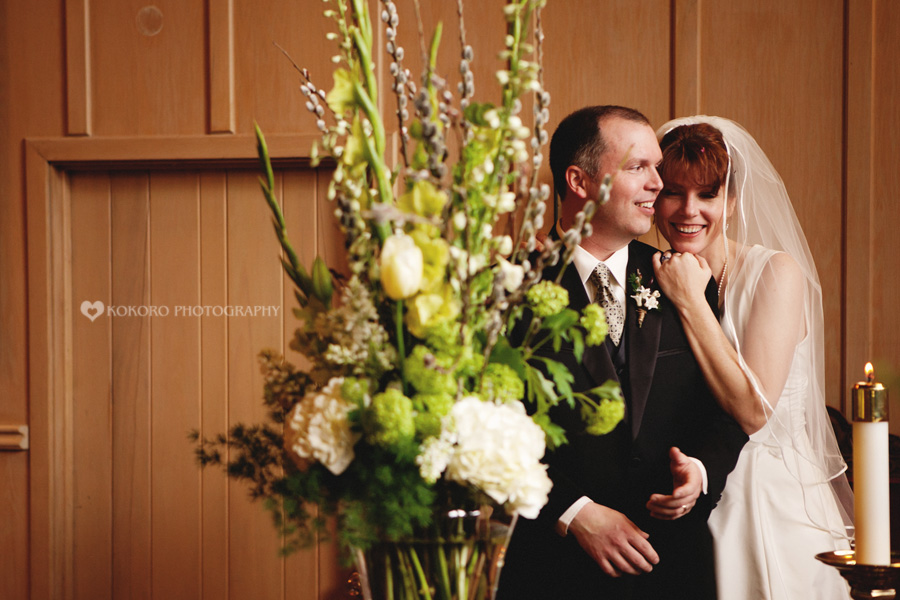 When we say in our “About Us” section that our couples can’t help but be themselves, I’m a little afraid that people will assume they’re not “weird enough” to be our couples. That’s not it at all- and I think Jen and Kevin are a perfect example of what we really mean. They have a certain comfort in who they are and an appreciation for their identity as a couple.

At their reception, after the toast, cake, formal dances, all the standard stuff, Kevin stood up and took the mic. He started explaining how at every wedding at some point you dance to the couple’s “song-” whether it’s their first dance, the last dance of the evening, what have you, their song is played. What you need to know about Jennifer is that she is very organized. She likes lists, charts, specifics. Kevin is a little more go with the flow.  For example, when we met with them before their wedding I made a distinction between a decoration being 12″ or 18″ away from the fireplace mantle. I could see that remarking on this difference was useful to Jennifer, and somewhat ridiculous to Kevin.

Apparently, during the course of their dating, Jennifer approached Kevin with a neatly detailed list of possible songs to be “their song,” and requested that he choose one. Or they choose one together. Either way, Kevin said, no, you can’t choose your song- your song chooses you. It’s not a matter of charts or lists- there’s a certain amount of fate or romance at play in his perspective. So they compromised. They decided that they would push the radio button, and whatever song came on would be “their song.”

The first button push was a weather report. The second, a smooth jazz song, and they both agreed that it had to have words. The third… and here Kevin paused,  signaled the DJ, and said, “For better or worse, this is our song…”

And, I kid you not, it was Feliz Navidad.

Which is awesome. And hilarious. But most of all, it was a perfect example of how Jennifer and Kevin lovingly embrace who they are as a couple.

There were other great things from the day- Kevin’s dad’s hot pink Crocs and matching cummerbund for example. There was also the moment when we were coming back from the Stanley and a firetruck passed us, heading up the road toward Twin Owls Steakhouse. Jennifer said, “Do you think my nephews burned down the reception hall?” There was a moment’s hesitation where we all considered the possibility- I think the pictures of  piles of happy, squirmy, rambunctious children say it all. At one point they’d taken the monkey tails from the bouquets and turned them in to bug antennae. Really, all the craziness seemed to be an expression of how the joy of these two families cannot be contained, and we were happy to witness it.