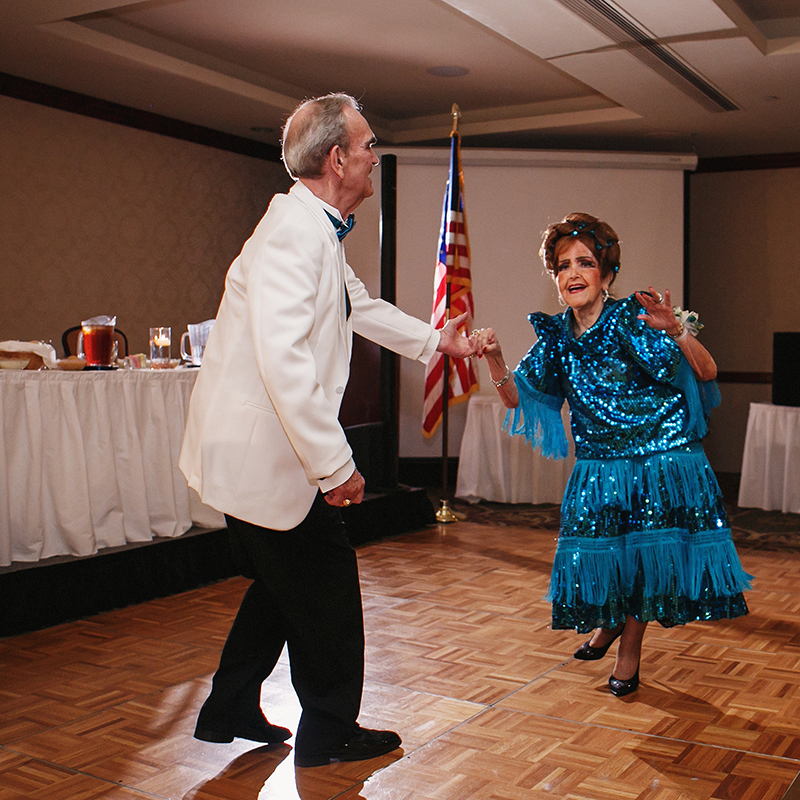 David and Maria celebrated their 55th wedding anniversary with an intimate party in south Denver. Although the couple lives in Spain, Maria’s home country and where the two originally met, they lived for a long time in Colorado. It was important to them that they were able to celebrate with family and their friends they made here.

When we sat down with them to talk about the details of their event, Maria told me that when they met she, “wasn’t interested in [David] if he wasn’t going to learn to dance.” Dancing is clearly a passion the couple share, and they were even featured on Spanish television when “Princesa Maria” became something of a phenomenon in the country. I love Maria’s personal style too- she is not afraid of some serious sparkle!- and when their niece and nephew presented a slideshow of their lives together, you could see that Maria has always been a fashionista.

I found it touching, also, that as part of David’s toast he had the assembly sing the national anthem. It’s funny the things you miss living abroad, and it’s getting more difficult for the couple to make the journey across the ocean. There was a lot of emotion in his eyes when he talked about that ritual from his home country, and it just, I don’t know, it touched me.

Congratulations on 55 years together you two, and we wish you many, many more dances together! -A&D

I pray that at 55 years my sweetie and I are still cutting a rug.

Congrats! Wish I could have been there… 🙂

What a CELEBRATION! While we were not able to attend, we were there in spirit! We loved our years as neighbors and we will always cherish the friendship. God bless you